Resch Expo is a 125,000 sq ft facility constructed for the purpose of hosting events and conventions. Events can be set up to utilize one large room or separate the space into three sections based on event needs.
Tweet/Garot’s scope of work for this project consisted of furnishing and installing HVAC and plumbing systems, including snowmelt piping for a large outdoor balcony area which consists of approximately 900′ of finned tube heat.

Duct sox was utilized in the Expo Area, which drastically cut down on the amount of double wall ductwork needed in the Expo Hall and made installation more streamlined. The project scope included mechanical systems for multiple large bathroom groups, facility kitchen and concession stands.

There are an impressive 112 underground floor boxes with waste and water hookups, along with substantial storm piping work to incorporate the design of the room system pitches.
Project Challenges:

The Resch Expo project was a fast-paced project. At times construction was ahead of the BIM team which put pressure on all teams.

The double wall ductwork in the Expo Hall installed within the building trusses was a challenge due to size and weight. The duct ranged from 76″ – 36″ diameter with some pieces weighing over 2000 lbs and hanging 40-50′ in the air. It was installed with a forklift and was difficult drifting the large pieces between the trusses due to weight and size, however Tweet/Garot completed installation successfully.
The varying height of the balcony concrete required every 6’ of the finned tube heat cover to be custom cut to adhere to the design parameters for the covers to remain flush with the lower window frames.

Despite the fast pace of the project, we continued to meet the completion deadline. 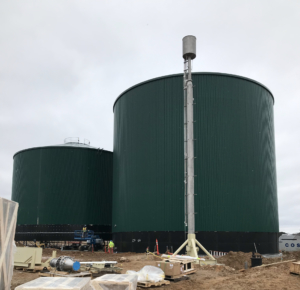